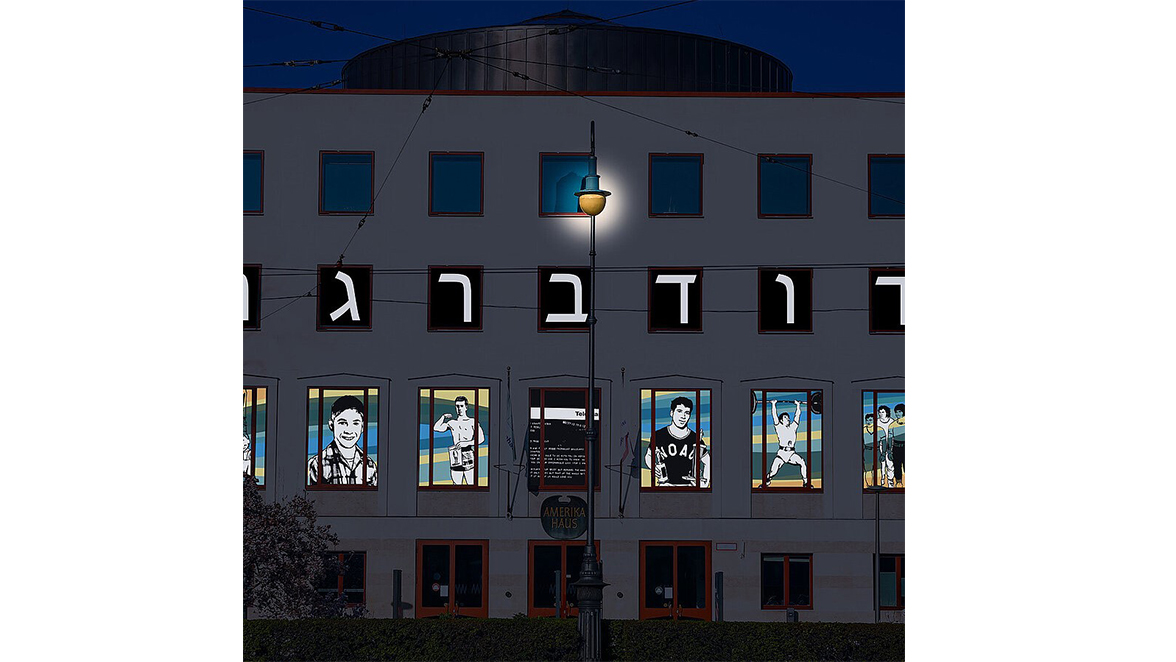 The 50th anniversary of the terrorist attack during the 1972 Summer Olympics in Munich falls in 2022. To commemorate the twelve people killed, institutions in Munich and Fürstenfeldbruck remember one of the victims, his life and fate each month of the year.

In January, the Amerikahaus remembers David Berger, a weightlifter in the Israeli Olympic team. Born in the USA, Berger grew up in Cleveland, Ohio. In 1970 he emigrated to Israel where he managed to qualify as a member of the Israeli team for the Summer Olympics in Munich. David Berger died on September 5/6, 1972, the last of twelve victims trapped in a burning helicopter in Fürstenfeldbruck.

The multi-media commemoration project for David Berger comprises two parts, related to one another but independent in their own right. Impressions from David Berger’s life are being shown on the façade of the Amerikahaus over a two-week period. At the same time, an audio track can be called up using a QR code—a quoted monologue tracing memories of him that draws us closer to David Berger as a person. This audio recording gives an insight into his life with commentaries from his family and encourages the listener to reflect on the democratic values of peace and education for which David Berger stood.

LISTEN TO THE AUDIO TRACK ON DAVID BERGER HERE.

To mark the 50th anniversary of the Summer Olympics in Munich, the Munich Massacre of September 5–6 , 1972 is to be commemorated throughout 2022. Every month one victim will be at the focus of attention. A variety of different actions in public spaces is planned, ranging from installations lasting the entire month to activities on one specific day.

This commemoration project has been conceived and coordinated by the Jewish Museum Munich in conjunction with the Munich Documentation Centre for the History of National Socialism and the Consulate General of the State of Israel.

It will be implemented with cooperation partners including the Amerikahaus Munich, the Landkreis Fürstenfeldbruck, the Deutsches Theater, the Police College—Hochschule für den öffentlichen Dienst in Bayern – Fachbereich Polizei, and the Munich Police Headquarters, as well as other cultural and educational institutions and interested parties.

The Jewish Museum Munich is also accompanying the commemoration project on its blog and its social media channels under the hashtag #MunichMassacre72.